Resilience Book Review: Ending Hunger – The Quest to Feed the World without Destroying It 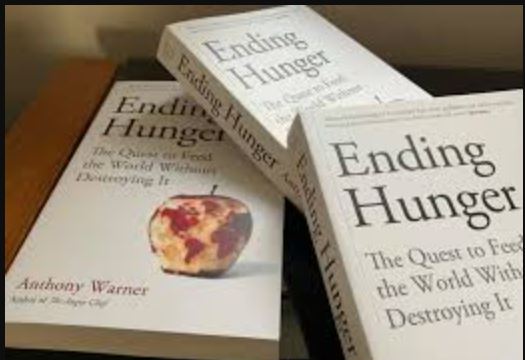 Anthony Warner’s 2022 book “Ending Hunger – the Quest to Feed the World Without Destroying it” (Oneworld Press) attempts to challenge the myths he sees in social discourse in developed countries about how to address world food problems.  Based on his popular blog “the Angry Chef”, he tries to replace pseudoscience with good science, along the way quoting credible scholars including Norman Borlaug.  For instance, he debunks the notion that eating organic foods helps address poverty or protects the environment.   He’s also skeptical of the health arguments for “paleo” diets. 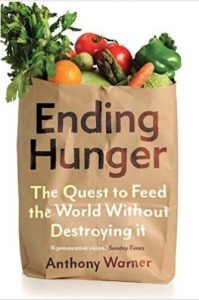 hunter-gathering societies to agriculture, and then on to the green revolution of the 1960s.    Critical to human population growth was the shift to food crops that could be stored between seasons, namely wheat, barley, lentils, potatoes and rice.  He asserts that the reduction in malnutrition and hunger around the world during the past century is one of the most important achievements of humanity.

Ending Hunger looks at both how individual consumption can make a difference as well as how global solutions need to evolve.   Warner recommends that people shift to diets that rely less on animal products.  He believes that Animal product consumption accounts for almost 15% of greenhouse emissions and growing fast, set to double by 2040 by current trends.  He recommends shifting diets toward lentils, pulses, chickpeas and other plant-based foods.   He said that “We have to get away from the social notion that one has to have some meat at the center of every meal, and instead recognize how plant-based products can be delicious.”  Furthermore, he recommends a more open attitude toward genetic modification of foods, which can improve yields and nutrient density.

Warner warns that  current “agriculture is putting a strain upon the air, the land, the water, the soil and every creature on Earth. The production of food has more negative impacts upon the planet than any other human activity.”  Based on this he argues there is a pressing need for change, with government intervention in agriculture systems.  Organic farming, he writes, takes up too much land and there has been too much deforestation.  “On pretty much every single metric of environmental impact, you’re worse off using organic farming,” he writes.

Warner wrote previous books, such as “The Angry Chef:  Bad Science and the Truth About Healthy Eating” 2017.