‘We had nothing to give him’: the human cost of malnutrition in Maharashtra 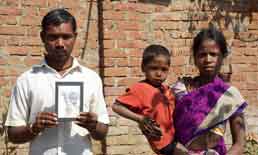 Devganga Sawra, seen here with his wife Sunder and younger son, holds an image of their son Vishwarnam, who died of malnutrition in September. Photograph: Vidhi Doshi/The Guardian

Two months after his second birthday, Vishwarnam Sawra died in his mother’s arms, one of thousands of young lives lost to malnutrition in the Indian state of Maharashtra after years of drought and withdrawal of state nutrition schemes.

The most valuable thing in Devganga Sawra’s hut is a memory card wrapped in lined notepaper and hidden in an earthen pot by the family shrine. The card, barely the size of his fingernail, has the only four images of his youngest son, Vishwarnam.